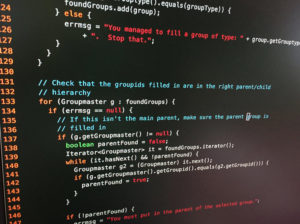 Some state legislatures have proposed that students who learn to code should earn world language credits. Is learning to code equivalent to learning a world language? The very idea of this seems absurd to a language professional. Coding is certainly a valuable skill in today’s world. It is also understandable that legislators and school administrators need to find space in an already crowded curriculum to squeeze in more learning. However, we believe it is a mistake to replace world language, the one place in the curriculum where students can learn crucial skills for success in our increasingly connected global society and economy.

How has language education gotten to this point? Perhaps we world language educators and advocates have ourselves partially to blame. Are too many language classes being taught in a way that makes people think that learning a language is equivalent to learning to code? Despite the efforts of the American Council on the Teaching of Foreign Languages (ACTFL) and leaders in the field to move language teaching to a real-world proficiency approach, the traditional approach of teaching language as a set of rigid, mind numbingly complex rules and conventions (verb conjugations, decontextualized grammar points, etc.) remains all too common in classrooms. In fact, this traditional way of teaching world language does feel a lot like coding. After all, coding consists of a set of specific, rigid lexicons and syntaxes that programmers use to create actions in computing devices. To compound the problem, many educational decision-makers remember that their own traditional language learning experiences were like working in a verb conjugation and translation factory.

If instead of teaching the traditional way, we teach language as the living, breathing way of interacting with people from different cultures and perspectives, world language could not possibly be confused with the skill of directing a machine to perform actions. We must highlight the aspects of language and culture that make it so uniquely valuable in today’s world.

We world language educators can and should move beyond outdated methods of teaching and prove to stakeholders that the educational impact of our subject is the equal of math, science, and language arts. If we can achieve this, no one will ever confuse language learning with coding again.